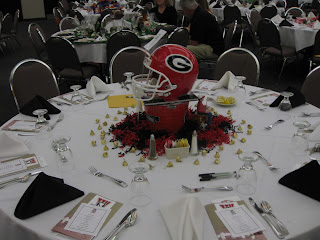 At our recent fundraising affair with Bobby Bowden I gained some insight that I really did not think would happen that night.  Kind of a serendipity.  I was getting ready for the evening and getting a little overwhelmed with all that needed to be finished in such a short amount of time so I delegated a task to my husband.  I gave him the task to decorate our table.  I had spent several weeks planning in my head how I wanted to decorate the table and what materials I would use etc…  I gave him all those materials and asked him to put them together.  I don’t know what I was thinking, because I did not give him any directions on my thoughts of how I wanted it done.  He 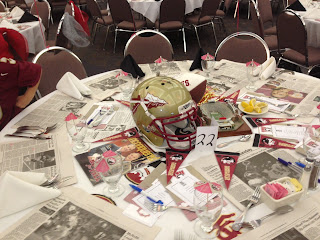 knew that I was overwhelmed at that point and knew better than to ask for details and he thought (I’m sure) that he had this under control.  I assumed he would not do this task at all and would just stick the stuff on the table.  Much to my amusement I saw him working diligently on the table about an hour into the prep time and he had created the above.  Now I will tell you this, it was not what I had envisioned. He had not used the flowers I had bought or the coke bottles that I had also bought.  But, the task was done.  He actually did a very creative design and I was quite impressed.  I then looked around the room at all the other creations and each was very special and unique but was a creation from each person’s own perspective. 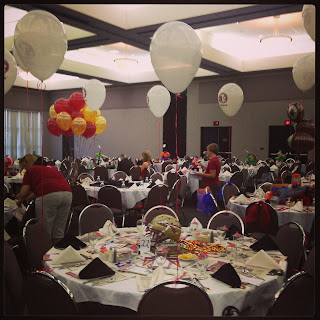 As I look back on this incident I learned a great lesson or two.  First, I could trust him with a task and he would come through.  Second, we have two different perspectives.  He had all the materials that I had bought but his design was totally different than what I had designed in my head.  His perspective was different, not wrong or right, but different.  He saw a totally different picture than I did.  Each of us views things differently.  We have different histories, and different pictures in our brains, so many times when we disagree it’s because we have different perspectives.  We may want to say that it is wrong, but can you really say that?  We have to put ourselves in their shoes or see things from their perspective.  When we can try to see things from another’s perspective we can have a better understanding.

When someone does something that might hurt you or does something that you just don’t quite get try to see it from their perspective.  Then the thing that I have learned is that you have to find the good in it.  I don’t believe people, especially those that love you and care for you want the worst for you.  Say to yourself “what were they thinking?” When you do you will have a much easier time being kind and tenderhearted.

One Response to “A Different Perspective”