After finally catching up from the “GREAT Adventure” I can get back to my post.  Last week I started comparing our journey to our marriage and as I thought about it through the week it became even more apparent that it really was a parallel to our marriage.  When we started off we were so excited and ready to do this.  Like we were when we got married.  And right away we had some rain,  just some misting and light rain.  I talked with several after our trip and they said they would have packed it up and come home then.  But John and I were committed. 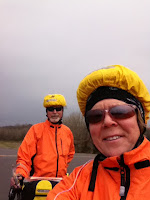 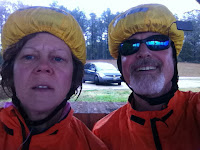 By the second day I was getting frustrated, it seemed nothing I did was right according to what John said.  “Get Closer” “You’re in the wrong gear!!” “Get that thing out of your ear” “Respond when I talk to you!”   And with all that being thrown at me I was angry, (but I wasn’t a quitter!)  I had to finally tell him that I really wanted to do this but I had to do a few things the way I did it if I would make it in the long run!”  I didn’t think he heard me, but he did and he left me alone.  I also started talking to myself that I needed to have a positive attitude rather than a negative one and I would enjoy this journey a whole lot more.  I put some positive music and a book on and listened as I pedaled, I was a much happier camper when I took this attitude.  I also started saying to myself, “What’s the good in what he’s doing here?”  When I did that I could put myself in his shoes and say to myself, he is wanting to keep me safe and make sure I can make the whole ride with him.  All of these things made a huge difference.

When we got to our second stop in Collinwood, TN, we stayed in a very humble motel.  Nothing fancy but it had a clean, warm room, with a shower,  and a wonderful host that let us in.  I fell on the way in to the hotel and the host was so precious in helping me up.  He truly felt horrible that a woman had fallen.  I saw that stage of the game as the stage where we are just getting started and it’s not really things that make us happy it’s the people and relationships.  John and I fuss, but once again, I realized that I would not want to do that trip with anyone else and I was going to cherish this time.  It’s kind of like the time in your life when you have nothing and you enjoy it.  You look back and think that was great!!! 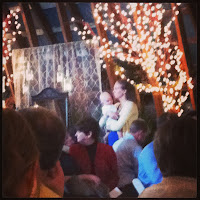 Well, right in the middle of our adventure we went home so that I could be with my best friend to give her daughter a bridal brunch and attend the wedding.  It was very complicated to do this but because of this relationship I knew I would regret it if I did not.  So we packed things up drove the 5 hours to Cleveland, TN, and spent the day enjoying the festivities and friends then got right back in the car and headed back again.  Don’t we have some detours in our lives.  We might just take a vacation or time off.  We don’t leave the relationship but change the routine.  We did that and wow! I was ready to go again.  I was glad I put the extra effort into it, then I was glad to get back into routine.  We keep on going.